Inverters are at the heart of every solar installers’ job. Solar panels produce direct current electricity from the sun, but an inverter makes that energy usable by homes, businesses, and the rest of the electrical grid by converting it into alternating current electricity.

For most of the solar industry’s history, there has only been one functional choice when it comes to inverter technology: string inverters. But in recent years, newer microinverters have come to challenge the dominance of string inverters in both residential and commercial installations.

When it comes to choosing between string inverters and microinverters, which is the better choice for your customer, the solar system, and your own processes? Today, we’ll take a look at the advantages and disadvantages of each type of inverter and how you can determine which is best for your next installation.

The advantage to string inverters is that wiring panels together to one or just a few inverters is time and cost-effective. Better yet, string inverters are reliable and easy to replace–an important consideration since the inverter is the piece of equipment that is most likely to take a solar system offline if it fails.

However, configuring a system to use string inverters does have one major drawback. Since the panels are wired in series to the inverter, the power delivered to the inverter is limited to the power output of the least productive panel in the system. That means that if one panel in a system receives afternoon shade or becomes partially obscured by debris, the power produced by the entire solar installation will suffer. While power optimizers–a modified type of string inverter–can help manage unequal power output across panels, any system using string inverters will ultimately lose some of its potential power output.

There are several advantages to microinverters. First, they eliminate the issue of electrical bottlenecking that string inverters face. If one panel becomes shaded or inoperable, the remaining panels can continue to produce usable electricity; the total output of the system will only fall by the amount of power lost from that single panel. Second, microinverters typically connect to Wi-Fi systems, which allows you or the system owner to wirelessly monitor the output of every panel in a solar installation. This feature in particular has made microinverters popular among homeowners.

When to Choose String Inverters vs. Microinverters

That said, there are a few cases where the benefits of microinverters can play an important difference in the cost and efficiency of a solar installation.

If you are installing solar panels on multiple aspects of a roof, such that there will be a large difference in sun exposure on the panels throughout the day, microinverters can dramatically increase the power output of your system. Keep in mind that while it would be possible to make this system work efficiently by using two or more string inverters, the cost balance shifts in favor of microinverters in this scenario for the majority of installations.

The other situation in which it can be worthwhile to use microinverters is when you’re building onto an existing solar installation. While it’s possible to connect new panels in series to an existing string inverter, that’s often not the most efficient use of the new panels since the older panels in the system will have lost some output over time. Instead, your team can leave the existing string inverter system in place and use microinverters with any new panels to cost-effectively increase the output of the entire solar system.

Keeping Costs Down for Your Customers

The choice between string inverters and microinverters for any solar installation typically comes down to balancing cost and system efficiency. But there are other ways to help control project costs too. Did you know that 64% of the costs of a solar system are soft (non-hardware) costs? Realizing this, solar installers around the country are using mobile workforce management and automation tools to streamline operations, and ultimately deliver more winning quotes and satisfied customers.

Like to learn more?  See how you can get with started free with a solar field operations app today. 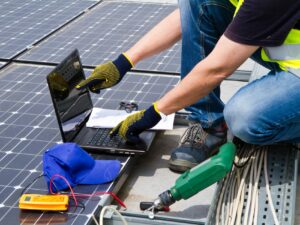 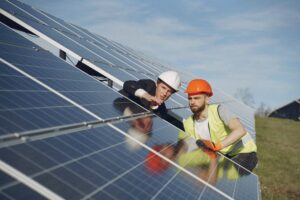 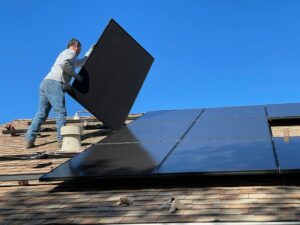